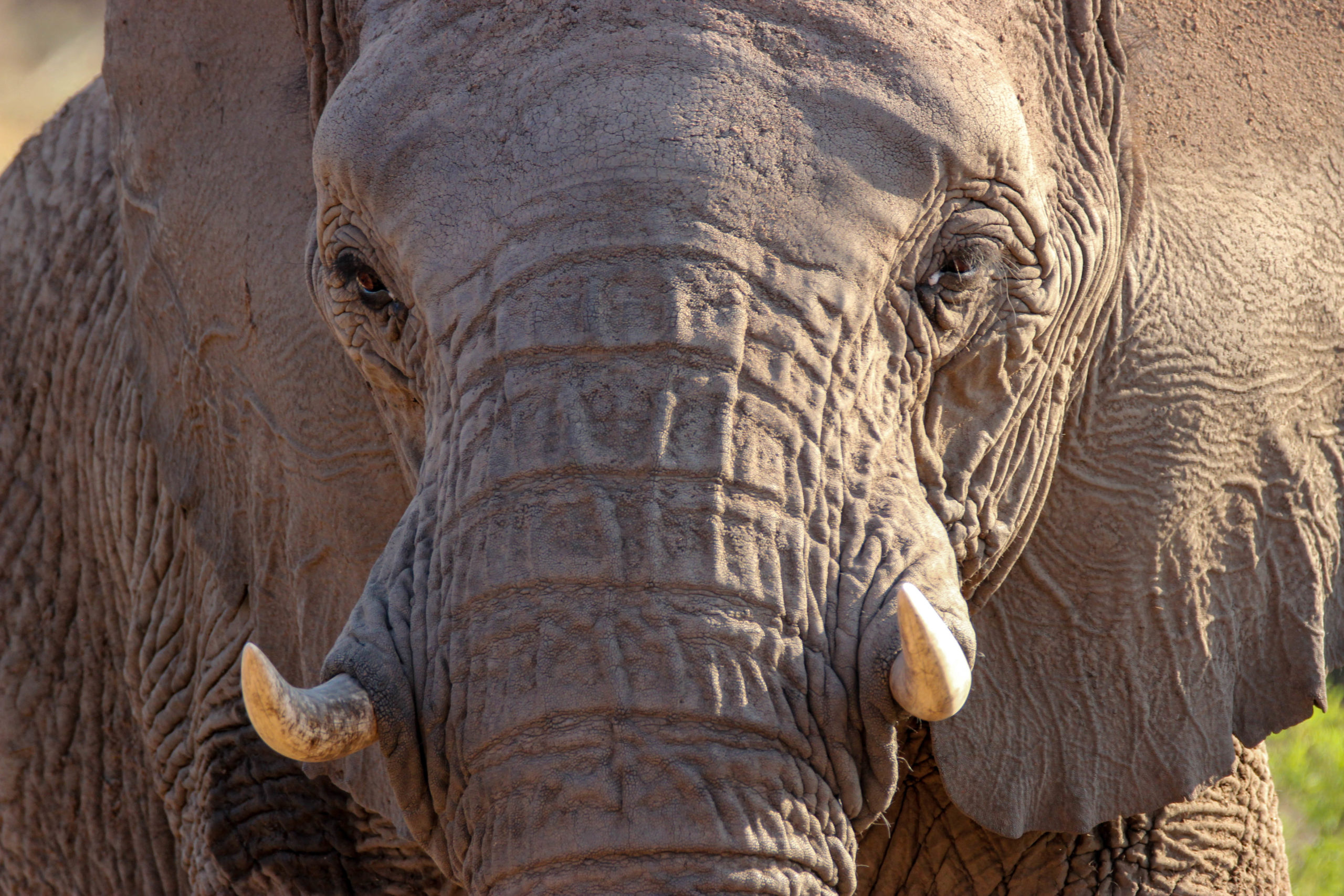 Elephants on Parade: Ann Gadd ventures into Botswana to find out what the state of the elephant population really is and to get up close and personal with these gentle giants.

He lumbered down the dusty road towards us. A large, lone, bull elephant. A steep embankment did not allow us to move further off the road to facilitate his passage – this was his turf and we were between him and his waterhole. The driver slowed to a stop, telling us to move all body parts inside the open vehicle and remain still. We watched and waited. One enormous tusk, waved at us, the other missing, cruelly unbalancing his great, grey, wrinkled head. Glaring at our small party with obvious contempt he continued towards us.

He was king of the road and all that lay beyond. He, would not give way. As he moved closer, his eyes met mine. Connection and cognition? He kept advancing, those watery eyes never moving from our party, passing so close that I could have reached out and touched his mighty flanks. He did not look backwards, instead, he strode on down the dusty track. Moments later he was gone from sight. But still, everyone remained silent. The experience was both terrifying and poignantly beautiful.

Botswana, home to the largest population of elephants in Africa with an estimated 150 000, depending on time of year, immigration, emigration, birth and death rates. (In comparison, the Kruger National Park has just 17,433* elephants).

In Chobe National Park, where you may find the highest concentration of elephants in Botswana, in places along the riverfront in the dry season there can be an estimated five elephants per square kilometre.

I had heard widely differing opinions as to the elephant population in Chobe National Park in Botswana. They were a common sight, not just in the park, but also strolling the streets of Kasane! But then finding a warthog recumbent outside your tent or strolling importantly around town followed by a line of piglets doesn’t even raise an eyebrow in this town.

The best source for dispelling these figures must be Elephants Without Borders, a charitable organisation, founded by Mike Chase and Kelly Landen, whose mission is dedicated to: “conserving wildlife and natural resources; through innovative research, education, and information sharing with all people, we strive to encourage mankind to live in harmony with wildlife and the natural world.”

Wanting to find out more I contacted Kelly, the Program Manager. Her response amused me: “Apologies, trying to find an elephant, as we need to remove her collar, because the batteries have failed.” Her a world, so removed from my small office.

Kelly is a dedicated conservationist, who has a host of skills to her name, including that of a marine Captain, photographer, working as a field guide/naturalist in North and South America as well as Alaska. Currently, among many other responsibilities, she is an aerial survey observer and orchestrator of the organisation’s projects.

Increase in the elephant population in Chobe?

I had been told of large increases in the elephant population in Chobe. “Not so,” says Kelly, “there is said to be an annual increase of 5% per annum under normal conditions in the wild, although in the Chobe area or across Botswana, we’re not finding that is the case. In fact, although in the 80’s and 90’s the population was increasing, recently we have seen a shift into the appearance of a stabilized population.

As a result, we are assuming then that that must be because the mortality rate has increased, fewer elephants are being born or that they are moving to other countries. Its possibly a combination of these three factors. It must also be noted, that 29% of the carcasses spotted in the Chobe enclave and the Okavango Delta, were situated close to human habitats. It’s known that there has been conflict in these areas between local communities and the animals.”

Kelly comments: “although it is recognized that it can be a challenge for communities to live alongside some of the world’s largest wildlife populations, there is an increasing understanding of the importance of wildlife tourism to improve the quality of life for these rural villages. Reconciling the needs of elephants and people, is a mission Elephants Without Borders is committed to.”

Whilst flitting over the great plains of Africa, might appear to be everyone’s dream, in reality, the aerial surveys require hours cooped up in small airplanes, which are both noisy and uncomfortable to fly in. (The temperatures inside can reach as high as 53°.) At times, an hour can pass without a single spotting, making the process tedious and only for the most dedicated of conservationists.

Kelly had this to say about the experience: “Although it is an amazing experience to witness and document everything from the air, it can be very trying on one’s perseverance and concentration. But we recognize the importance of these surveys. It’s a huge responsibility that I’m honored to carry.”

“The purpose of the censuses is to motivate and inspire decision makers with information that they previously did not know about” comments Mike Chase. “The Great Elephant Survey is the largest and most accurate survey ever done of elephants in Africa and is being used to assist conservation and elephant ecology and already has had a profound effect on elephant conservation.”

I asked Kelly about why she has devoted her life to the preservation of these animals: “I’ve always been fascinated by wildlife. However, once my dreams became a reality , I realized it is much more challenging than ever thought.  The more I learn and experience working with elephants, the more dedicated I become. They are amazing, sentient beings and am constantly humbled in their presence.”

For the moment, in Botswana, the elephants’ existence is stable, unlike the tragic decline in areas such as Northern Cameroon, Mali, Mozambique and Angola. But, it’s not a situation that we can simply say “phew” and forget about. Like the elephant itself, we must never forget the men and woman who’ve made preserving our wildlife their lives.

How the aerial surveys are done:

In 2010, Chobe and Makgadikgadi National Parks, Nxai Pan, Moremi Game Reserve, the Okavango Delta and the surrounding Wildlife management areas in Ngamiland, Chobe and Central districts were surveyed, totaling a massive area of 73 478 km2 . The operation was undertaken to ascertain the population of elephants in the areas. It was to be the first independent aerial fixed-wing survey of its kind in the area, where 20% (as opposed to the previous, government sponsored 5%) of the area would be covered to ascertain wildlife populations.

It was no small undertaking, requiring 250 hours of flying time. The results, when compared to the earlier surveys of the Botswanan government, showed that 11 of 14 animal species had population decreases of on average 61% (particularly in the Okavango Delta), between 2006 and 2010. Worst affected were wildebeest in the Okavango Delta. The good news though was The elephant populations across Northern Botswana, appeared to have stabilized and were possibly increasing, which is good news.

Between 2011 and 2013 EWB surveyed an area of roughly 22 560 km2over the Chobe District (Chobe National Park, Chobe Forest Reserve, Kasane and surrounding Wildlife Management Areas). The elephant population had stabilised overall, in both instances, although it was nothing like the days prior to 1976. However, in certain areas, such as Chobe National Park the numbers appeared to have decreased. This reduction in numbers, could be due to the fires and dryness experienced at the time of the survey, meaning that the elephants may have moved to other areas or countries.

A survey done in 2016 by EWB headed by Mike Chase, of African elephants involving a massive 406 days of flying time by 81 aircraft, has provided the first ever list of 18 countries and their elephant populations and data as to their increase or declining numbers. But, although, some areas had shown an increase or decrease in numbers, Botswana’s overall results showed a stabilized population according to EWB.