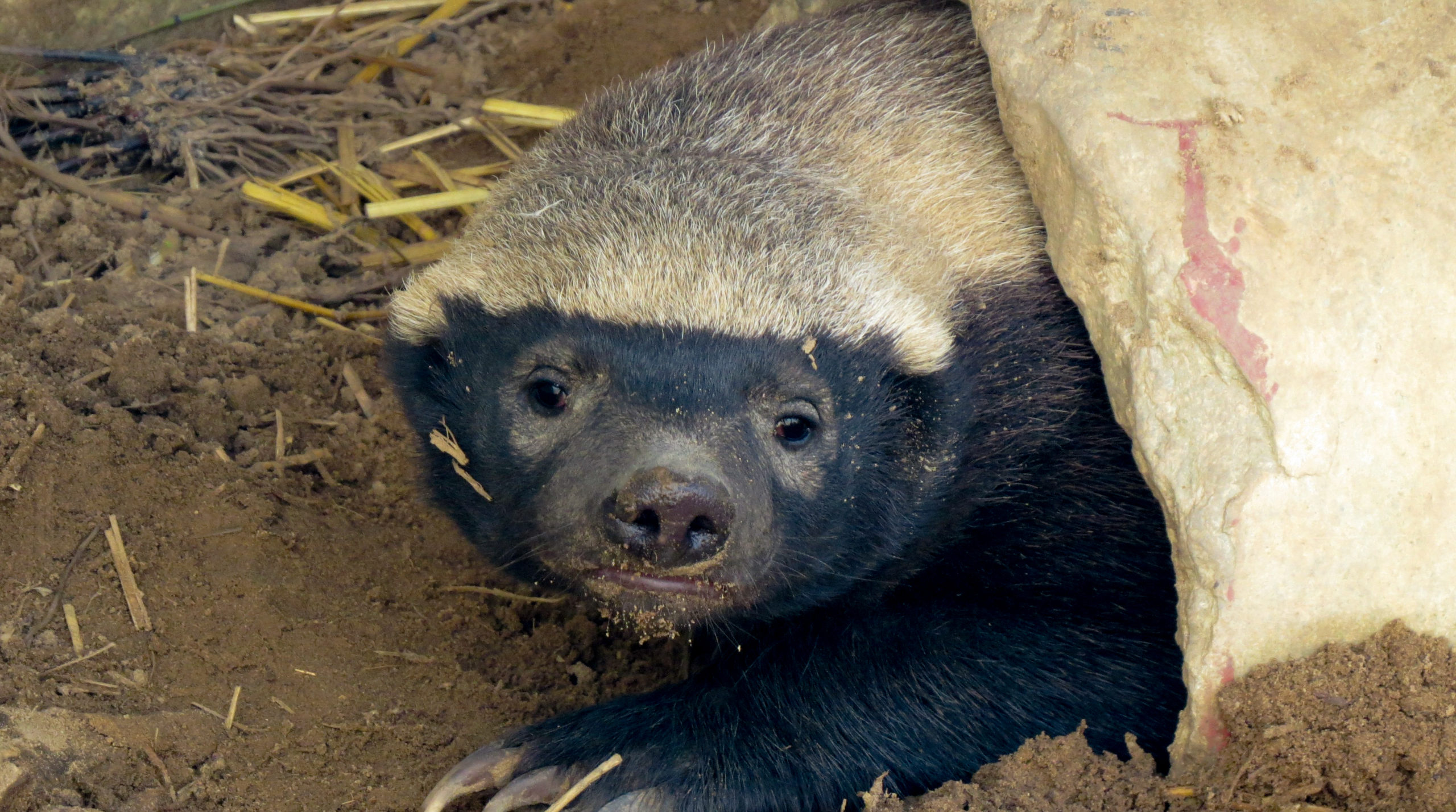 Sylvester the Badgering Badger: From an article in Country Life magazine

Ann Gadd badgers veterinarian and urban wildlife specialist Dr Dorothy Breed to find out more about honey badgers, and in particular, the one that took itself on a seaside holiday to Melkbos.

Something strange was happening in Melkbosstrand…

The local Facebook page was alive with messages reporting an ‘American Skunk’ aka Sylvester the Badgering Badger, entering homes and helping himself to plentiful pickings. The honey badger (alias skunk) was fingered for a number of ‘crimes’ (many of which were probably perpetrated by meerkats, or a caracal also spotted in the area). A devastating “murder scene” occurred at a Koi pond, missing kitties at Atlantic Beach, stolen food, a fridge which was broken into… the list of crimes lengthened, and everyone speculated who the culprit was, but for most incidents, the honey badger was the prime suspect.

“And they lurrrrve cheese and ham.”

“Has now run off into the Green Belt at the old fire station. Am not sure who to report it to or if it is in fact someone’s pet.”

“Wow we have been here for 16 years and never seen anything like it!”

Inevitably there are problems when wildlife meets urbanization. Wild animals that grow up in urban or semi-urban areas, usually adapt their habits to survive. This eight-week old orphaned badger had no-one to teach him to avoid humans and how to hunt.

“I had one in my bathroom! Took a week to get rid of the smell.”

But I soon forgot about the badgering badger, until I happened to go hiking in the Blaauwberg Nature Reserve, with my Wednesday Walks group and our volunteer guide, Stephanie Muller, mentioned that the badger had been housed in the reservoir there. “The first time he escaped, he was caught by the SPCA, who contacted the conservation authorities. He was then placed here again, but escaped, as I recall. He was very determined!”

Honey Badgers have been recorded over most of South Africa, as well as sub-Saharan Africa to southern Morocco and southwestern Algeria, and outside of Africa through Arabia, Iran and western Asia to Middle Asia and the Indian peninsula.

I personally encountered one whilst camping at Trouthaven near Rawsonville. Waking up one night I heard a raucous in the other ‘room’ of our tent. Presuming it was hubby Anthony, seeking a snack, I was about to roll over and go back to sleep, when I saw he was in fact sleeping soundly next to me. Leaping out of my sleeping bag in full warrior mode, I saw the tail end of a honey badger exiting the tent. I spent the next few days trying to get a photo of him, but although we spotted him on several occasions, by the time I clicked the shutter button he was just a streak in the undergrowth.

Due to human conflict and habitat destruction, badgers are either absent or now very rare, in areas where they used to occur. I was surprised to hear about the one at Melkbos, so I went to Blaauwberg Nature Reserve office at Eeerste Steen, just south of Melkbos to meet Dr Dorothy Breed, the City of Cape Town’s veterinarian and urban wildlife specialist, who I’m told had dealings with the Melkbos badger.

“The badger was brought in by a member of the public to a local conservation office. Due to their suspected low numbers in the area, it was decided to attempt to rear and rehabilitate him,” she told me. “The initial intensive milk-rearing phase was done at a rehabilitation centre that had the resources and trained staff to do so.

Nature Conservator Dale Slabbert, oversaw cleaning, stimulating and feeding the badger. “He was fed a variety of foods that he could come across in the local environment, to develop his foraging skills – roadkill snakes and birds, eggs etc.” she told me.

How Sylvester the Badgering was kept wild

Dr Breed informed me: “This period was kept as short as possible. In the wild, badgers remain with their mothers for up to 18 months, learning how to survive in that specific habitat. To limit human contact and to avoid associating people with food, we used a remote enclosure and special feeding techniques. The ‘wilder’ he was, the greater chance he had of survival,” she added. Habituated (‘tame’) animals have almost no chance of being successfully reintroduced into a natural environment, and either have to be euthanised or spend their entire lives in captivity.”

Once the badger (whose name I’d discovered is Sylvester), was weaned and was eating solids comfortably, he was placed in an old reservoir in Blaauwberg Nature Reserve for the rest of the rehabilitation process. Here he remained for approximately a year.”

The day he caught a bird unaided, was a sign that he could fend for himself. But, the best laid plans of badgers and men, seldom pan out as planned and unfortunately, upon initial release, the badger ventured into Melkbos and its culinary delights.

“Some residents even left food out to attract him to their properties. We realised after he was caught the first time that, if he repeated this behaviour, we would have to find another location as soon as possible before the behaviour became set,” Dr Breed added. “In the end, it was decided to move the badger further north to Bokbaai, which was still in the allowed area of release. We hoped this would reduce the chance of further incidents. We were also hoping that the coastal habitat would provide increased food resources.”

Sylvester the Badgering Badger gets a “soft release.”

“A ‘soft’ release technique was used again. As before, we slowly reduced the frequency of feeding, as we monitored his returns to collect food occurring less often. We had cameras in Bokbaai to keep an eye on his movements and were very happy to see he joined two other bachelor badgers. He slowly stopped returning altogether and the local manager reports that there have been no incidents since he was released. We were very lucky that he met the other male badgers at Bokbaai to assist in teaching him survival methods specific to the area. They helped hugely with the successful release. We were very worried when he entered Melkbos, but luckily the roughly 18-month project ended successfully, and we were able to learn many valuable lessons along the way.”

So, for Sylvester, life is really a beach!

Firstly, did you know, the honey badger’s skin is unique in that it’s very thick and loose. This affords it a lot of protection and is one of the reasons it’s so resilient towards bee stings, snake bites and other predator attacks. Badgers have been reported dying from stings. As a result, we know they are not completely immune.

Honey badgers are a specially protected species in South Africa. You require a permit to capture or keep one in captivity.

Some immunity to snake venom

They are immune or have a degree of immunity to certain snake venoms. The neurotoxic venom in cobras usually binds to specific receptors in a mammal’s body resulting in paralysis of all muscles including those used to breathe – resulting in death. A recent study showed that these receptors in badgers and some other species, has evolved to avoid binding of this toxin. This has resulted in a form of resistance in badgers, as well as mongoose, hedgehogs and certain species of wild pigs.

The public mustn’t feed them

Don’t feed them. Dr Breed asks that people do not feed wildlife or to make food easily accessible to them. Once an animal associate’s humans with food, they can become a serious problem and it will be the animal that pays in the end.

Did you know, badgers have been known to give lions a run for their money when challenged? They are renowned for their tenacious and ferocious nature. However, they will avoid human interaction, and will not attack a human unprovoked (as is the case with most wildlife). Don’t corner or try to catch them. Injury is likely if you do.

Pass the larvae dear (not the honey)

Interestingly, badgers prefer bee larvae rather to honey.  As a result, they often come into conflict with irate beekeepers. In general, they are omnivorous and creative opportunists, which can also land them in trouble with humans. It is important for consumers to look for the badger-friendly mark on honey. To date, over 320 beekeepers have subscribed to the SABIO Code of Conduct.

Save the badgers, Honey!