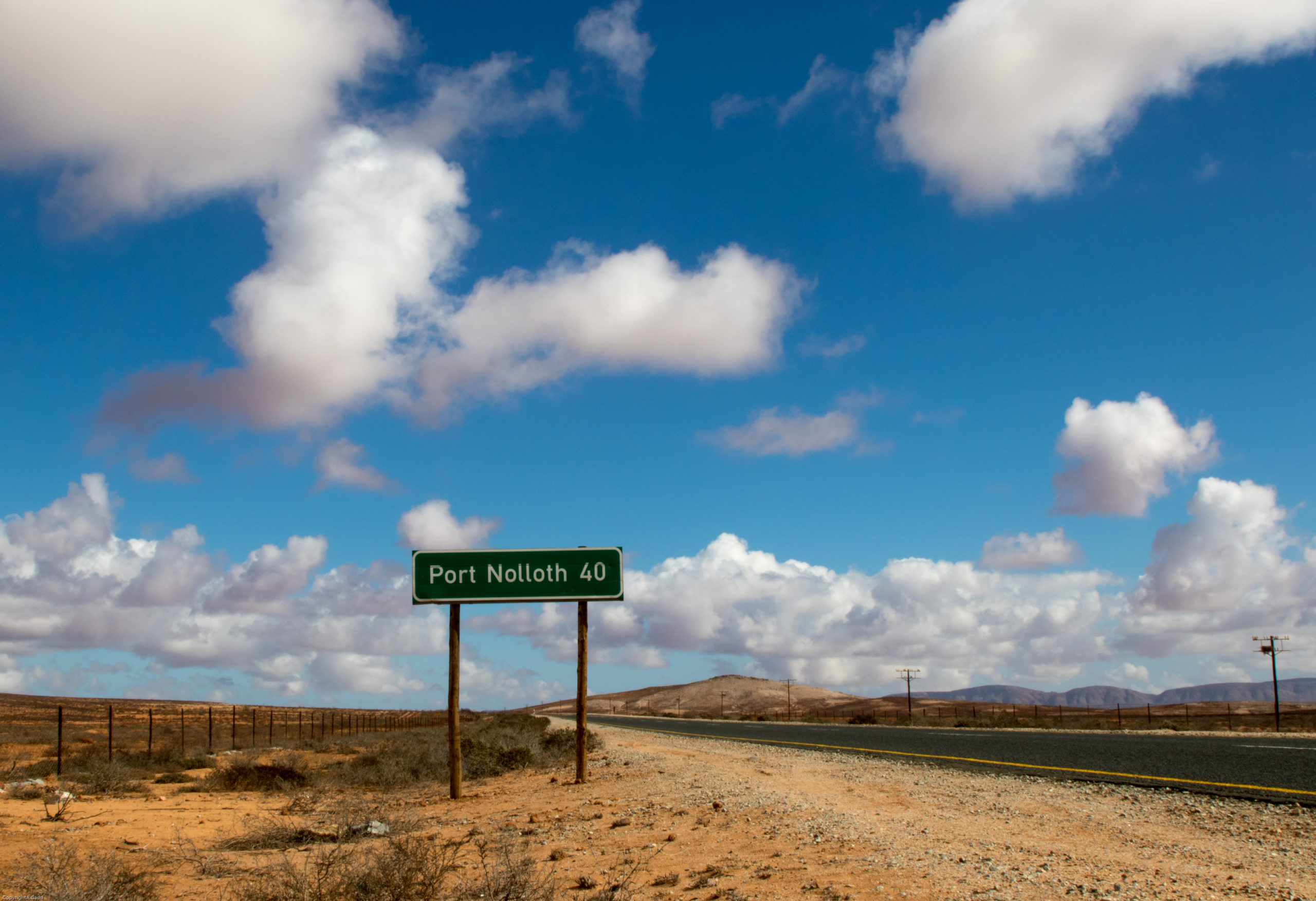 Diamonds and Dust: Ann Gadd takes a walk on the wild side to Port Nolloth and McDougall’s Bay to discover the best of the west

Diamonds and Dust: The rich orange of the earth alters on the outskirts of Port Nolloth to a light, sandy ochre as we ride into town. The vegetation becomes sparser and the ever-present west coast fog “Malmokkie” winds its way through town, making it feel as if Anthony (husband) and I have arrive on the set of an old black and white Western movie.

I believe you can tell a huge amount about a town from the local petrol station café. If Tant Sannie’s koeksisters and homemade vetkoek are on offer, you know you’ve come to a dorp where life is the way it should be – tranquil and welcoming. In the Port Nolloth petrol station café though, I wasn’t sure what to make of the camouflage gear, ammunition, rifles and fishing lures on offer. (And no vetkoek or koeksisters.) Clearly, Port Nolloth was no ordinary town.

To add to the credence to the title of a “one-horse town”, we find a gelding strolling untethered, snacking the sparse grass next to a lamp post. (Apparently there used to a whole herd, but this is the last remaining one.) “Go ahead,” I drawl to no-one in particular, “make my day!”

After being known as Robbe Bay due to its seal-culling operation, Port Nolloth became a port for the Okiep copper ore mines. The original name though was Aukwatowa, which means ‘where the old man was washed away.’ (The day before, the name came eerily true when the sea claimed yet another life.) When diamonds were discovered every wild adventurer this side of the equator (and a few north of it), hit town, down lured by tales of instant fortunes.

Diamonds in the Dirt

Stories of diamonds and trades of a “a sakkie for a bakkie,” (a sack of diamonds exchanged for a brand new bakkie), abound. Ingenious methods for smuggling were contrived – from women carrying them in curlers under hairnets, to swallowing them and even sewing them into self-inflicted wounds to avoid detection.

I stop to chat to a local policewoman who I can neither name or photograph, about the problem: “people here have grown up with diamonds. They don’t see that taking a few for themselves is a problem, anymore than taking fish from the sea is.” Then a police van arrives, and she nods officiously and jumps inside before I have the chance to enquire further. Apparently, an estimated 30% of diamonds mined along this coast are smuggled out.

Predictably, talk in the town centres on fishing, diamonds and booze. But now the diamonds have dwindled and work for the men of the west has diminished. The result? Many men have had to leave town to find employment. Those who remain rely mostly on fishing or working on the few diamond concession boats remaining.

Taking a jaunt south to nearby McDougalls Bay, (a mishmash of holiday homes set around a tranquil bay), which now almost runs into Port Nolloth, I meet Jeanie Hollands who has lived here for 26 years. “There is no work for the men here. My husband is currently in Egypt, heading off to work on an oil rig. He used to dive diamonds. My 17-year-old son is in Cape Town training for his diving certificate because he wants to come back and work for one of the private boat owners who operate concessions. My younger son just walked out of school because he wants to catch snoek and crayfish – he says there’s more money than being in school. Only my daughter has stuck with her studies.”

“There are strange things happening in the town,” she continues, “the snoek season normally lasts a month, but this year it’s gone on longer than three months. Guys are driving from Cape Town overnight to Port Nolloth to collect fish and then selling it in Cape Town the next morning and driving back again.”

This turn of events is echoed by Helena Moyses, who I meet at the museum. “We’re catching fish we’ve never seen before. Strange fish. The flamingos which were once so much part of Port Nolloth seem to have gone, at least for now.” (Although we do find them up north in Namibia). “Other birds have arrived though – eagles for instance and the Barlows Larks are still around.”

Growing up in Port Nolloth

Like her the delightful roguish ex-diamond diver, turned museum curator, George Moyses father, Helena is a great raconteur and tells me about her life as a child growing up in Port Nolloth. “Dad wasn’t around much, but if he couldn’t give us time, he gave us freedom. As kids we roamed wild. Some days when the diamond hunting had been successful, we lived like kings. But most of the time we struggled to make ends meet. Dad promised mum when they came to Port Nolloth they would stay here for two years. Its now 27 years later and they are still here.”

No trip to Port Nolloth is complete without a visit to this museum. It was originally started by Grazia de Beer, a glamourous and enterprising Italian who after being schooled in the Cape, moved to Port Nolloth, where she spent 20 years collecting the artifacts on display and running various B&B’s. The beachfront is named after her.

The museum is now run by rough diamond Georges who really gives you colourful glimpse into the world of diamond mining, diving and the general history of the town. He’ll amuse you with stories about his ex-girlfriend who stole his diamonds and his penniless friend who became a millionaire overnight. George tells us that, “currently an average of two diamond divers die every year whilst dredging for the stones. They work on average four days a month.” The risks these days don’t seem worth the rewards.

“Nowadays,” he informs us, “getting here is a simple affair, but in the late 1800’s embarking or disembarking from a steamer necessitated climbing into a large cylindrical basket which was hoisted by chain and pulleys and unceremoniously dumped onto the pier or ship.”

George then shows us the actual menu from the Klipfontein Hotel dated 10 December 1876. Diners could enjoy a choice of tortoise or sheep’s head soup, followed by pig’s Afval, Camel Kebabs, white ants with onion or wild duck salami. Or, the exclusive dishes: Roasted Flamingo and wild duck, Namakwa Pigeon Pie or boiled ostrich egg. My fish and chips from the previous night feels like an infinitely better choice!

The most northerly lighthouse on this coast in South Africa.

We stroll around town past the white-washed Roman Catholic Church, (1904), one of the oldest buildings in the town. Then head inland past broekie-laced cottages, to the most northerly lighthouse on this coast in South Africa. This strange aluminium lattice tower is an upgrade from its predecessor, which was simply a ships lantern hoisted onto a steel tower. We ring the bell, but no-one is home, which is a relief, as I wasn’t convinced about clambering up the ladder to its 11m summit.

It’s time to find coffee and so we head to Nemo’s to find Bets Strydom, the co-owner pruning her plants. “I’m from Welkom. I’ve lived in Port Nolloth for four years though. I first came to help at Nemo’s and have now, with a partner, ended up buying it! I love it here.”

But Nemo’s is still closed, so we head to Tripadvisors No1 coffee shop in Port Nolloth, ButterCup. Here we find the elusive vetkoek and koeksusters plus cappuccinos and bobotie jaffels. A splendid mid-morning brunch! The owners, Marix and Ledine Becker have moved from Pretoria to start the coffee shop. “We enjoy the interesting characters who live in Port Nolloth,” she smiles, “and we both enjoy the quietness of the place. We would never want to go back to Pretoria.”

Note: Sadly Buttercup has since had to close

I thought we were just lucky to have had moderate weather on our two visits, but I’m told despite the desert type environment, the average maximum temperature is only just above 20 degrees, with an annual variation of less than 4 degrees between the hottest and coldest months. Port Nolloth has none of the upmarket shops you’ll find dotting the east coast towns of South Africa, yet its for this very reason that I enjoy the place – its rough toughness is its beauty.

As we stroll leisurely back to our hotel, George’s parting words come back to me:

“Remember, don’t rush doing things in the morning here, else there will be nothing left to do in the afternoon.” Somehow, having nothing to do, seems like a splendid idea!

Diamonds and Dust – Port Nolloth: Know before you go: