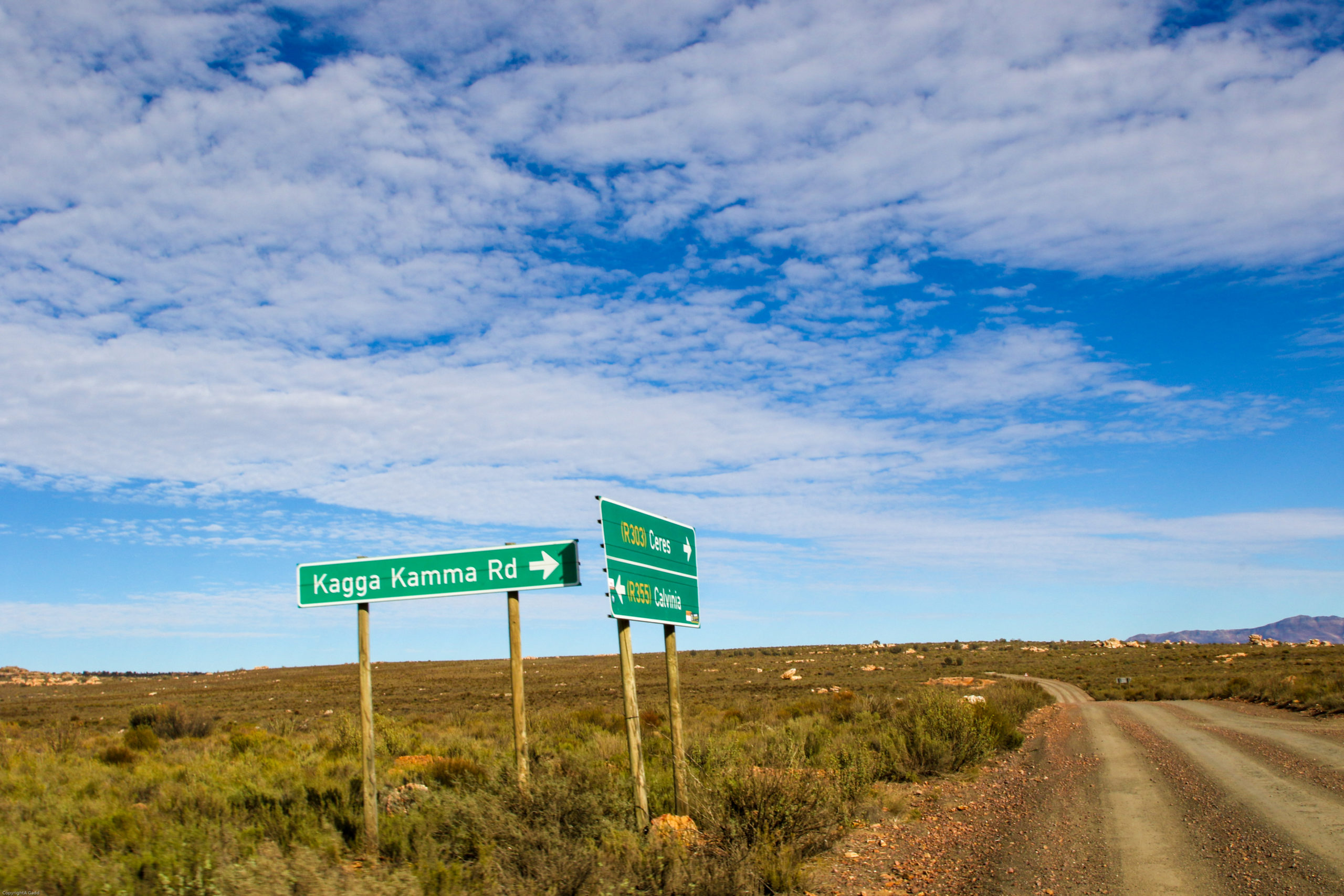 For five nights we have lived in tents, ‘showered’ with hoses placed in rainwater tanks, and eaten a strange combination of toasted sarmies, burnt potjie and dolmades, (the latter gifted to us). Now, we want our own beds back in Cape Town, plus hot showers and a  more varied menu.

But first there is the matter of the R355 between Calvinia in the Northern Cape to Ceres in the Western Cape – the longest, straight, dirt road in South Africa. We stop about halfway at the Tankwa Padstal and, over a forbidden treat of gooey white, egg and bacon roll, and coffee, discuss the options for the trip south.

Driving back from the Burn, we want no more of the R355’s corduroy corrugations. No further bumps in the road home or tyre-slashing shale. We feel shaken (not stirred). We’re done and dusted. Our friends in their vintage ‘Tankwa Taxi’ (a converted Toyota), agree.

“We are going home on a new route via the Skitterykloof/Katbakkies/Gydo/R303 pass that cuts out the remaining 45 kilometres of the R355. It’s 15 kilometres and roughly 30 minutes longer to Ceres from the Tankwa Padstal. Gven the heavy traffic on the R355 though, it may be faster,” AB informs us. There are also no petrol stations or foodstops along the route.

Only the Gydo Pass has road markings and safety barriers. Both the Skitterykloof and Katbakkies Passes are tarred at their steepest areas, whilst the entire Gyro Pass is tarred. Anthony and I love to go where we haven’t been. Consequently, knowing that there’s likely to be scenery difficult to beat, we decide to explore the route.

After filling up with petrol (there are no other petrol stops until Ceres), we give a last glance to the resident emu and the strangely upturned car at the padstal. Then we turn left onto the R355 and, 2.5 kilometres later, right onto the Swartrug road, heading westwards. We agree that, given my obsession with the camera that necessitates frequent stops, we’ll let AB and Riana travel at their own pace and we’ll connect via sms should there be any problems.

The road starts off as little more than a smooth single gravel track for three kilometres until the start of the 4.5-kilometre Skitterykloof Pass. This pass is also known as the Peerboomskloof Pass or Speserykloof Pass. The pass is so called either because it’s so bumpy (I didn’t find it so) or because a type of bush grows there that gives sheep diarrhea (skittery – runny tummy) another meaning of the word). It’s a pass that often gets confused with the more westward Katbakkies Pass, both viewed as one rather than two passes.

Partially tarred and with a steep 1:7 gradient that has stunning views of the Tankwa, it’s a scenic route from the harsh desert into the Cederberg wilderness. There’s plenty of bird spotting (birds are especially attracted to the Aloe comosa flowers), particularly the Cinnamon-breasted Warbler. Best spot to view them is the pull-off area (1 050m above sea level) on the left.

This is a Martian landscape of scrub and wind-eroded sandstone. The shapes and forms remind me of a giant dodo, a weird cat, a pulpit. The air is icy and the wind, although light, fingers into every available opening of my clothes. A dilapidated signboard at the viewing spot tells us ‘please no’, but not much else.

We come to the ruins of a shepherd’s stone farmhouse. Clearly not having neighbours wasn’t an issue for its previous inhabitants, who must have had to contend with hot summers and fearsomely cold winters, in an area where no crops grow and only the hardiest of sheep have any chance of survival.

Once we pass the turn to Kagga Kamma resort, the signposts give the road a feeling of respectability and security – people do actually drive on this road. It’s here that I once saw leopard tracks right outside the Kagga Kamma restaurant. The local municipality must have used the year’s budget for the road signs on this pass. They are ludicrously numerous. Then we’re onto tar and the road falls away in front of us, as we wind around steep craggy cliffs and pray that the brakes work. The Toyota seems unperturbed.

The road then reverts to gravel before once more becoming tarred at Katbakkies Pass. This pass  reaches 1 200m at its highest point . Like the other passes, it was once a simple path used by the Khoi to transport sheep from the Kouebokkeveld over the Skurweberge to the Tankwa Karoo. Later, farmers drove their wagons and cattle along the same route.

A number of explanations for its name exist:

The pass is about 54 kilometres long and one of the steepest tarred passes in South Africa, moving from a 1:13 gradient in parts to less than 1:4. It also includes two 90-degree turns, so stick to the speed limit of 30-40 kilometres. It’s best, we decide, to descend. I enjoy the slow speed, though, as it gives more time to enjoy the surroundings.

The tar road is accessible for an average sedan, but don’t be fooled, it can be dangerous – these passes can get covered with snow and, given the unpredictable weather changes here, it can change from being sunny to snow in minutes. Rain and snow can make the passes treacherous, so check with local weather stations regarding any chance of rain or snow before you go, as they can be closed for several days in winter after snowfalls.

Then we’re on tar and the road falls away sharply in front of us, as we wind around craggy cliffs and pray that the brakes work. The road is narrow and unmarked, but does provide two lookout points, the second giving the best views across to the Sneeuberg in the north.

At the end of the pass we cross the Rietrivier on a single-lane bridge. On either side of the road are sandy areas (known as the Rietvlei Desert) so that it looks as if, just over the hill, we might find surf’s up and there’s a peeling left-hand West Coast break.

The road turns into the 32-bend, 6.6-kilometre Gydo pass that has five bends exceeding 90 degrees. Some people argue that Gydo means ‘steep pass’ in /Xam but Gydo does also mean ‘milkbush poort’ from the Khoi guidaos, which I’m told is fatal for sheep but good for steenbuck and klipspringers.

It’s a snake-like pass with breathtaking views over orchards, fields and dams. It’s also wider and less steep than the other two passes and was once the venue for the King of the Mountain motor rally, in which drivers were given three timed runs up the pass. The fastest recorded speed at these rallies was 194kph, in what is a 70kph traffic speed zone, but after two tragic accidents in 2008, the event was closed.

The terrible fire that ravaged the area in late 2016 appears to have destroyed much of the flora, because I can see no euphorbia (milkbush) after which the pass is said to be named, just personal euphoria to be here in this land and landscape.

My mind wanders to imagining the teams of convicts sent out into this remote area in 1848 to build the Gydo Pass to connect the koue- with the warm bokkeveld. (The original pass is still visible from the new road.) It was one of the eight passes built by Andrew Geddes Bain, whose son Thomas Bain, topped his father’s efforts, by building 24.

The pass ends at the R303 in the fertile Witzenberg valley where a sms confirms the Tankwa Taxi’s safe passage home. We head into Ceres for coffee. Slurping my brew, I reflect on the three interleading passes and the surrounding landscapes – semi desert, lush greenery, wild rocky areas and even an area of white sand. Is this variety possible anywhere else in the world in a single day?

True, we missed the snow, but that remains to be explored on another trip – a lust to wander and a desire to make dreams reality, will ensure that. I remind myself of all the paths and passes I take in life, and that I will make sure some of them are steep, winding and full of beauty. The rewards are worth the effort.

Know before you go: