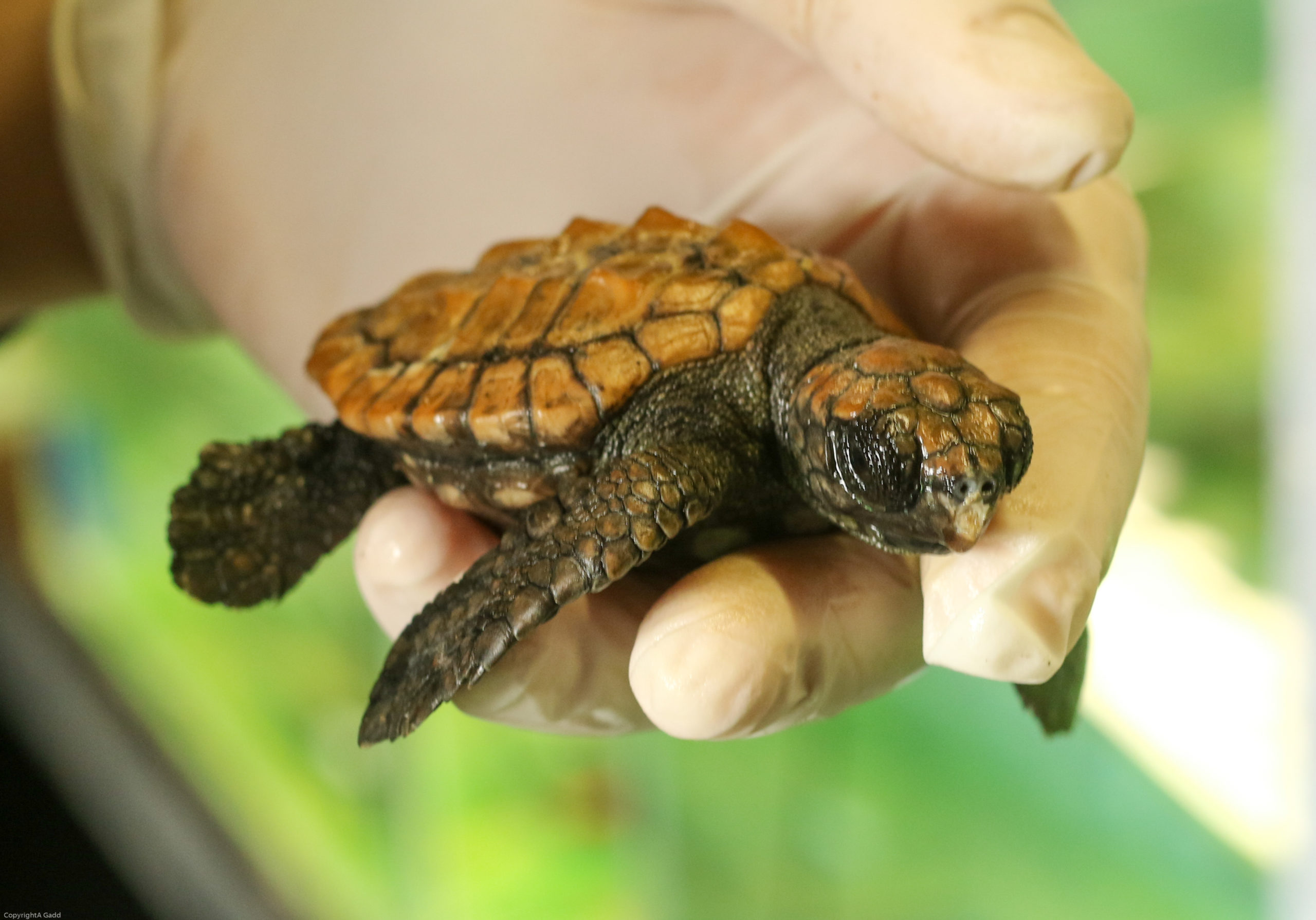 Ann Gadd sticks her neck out and heads to the Two Oceans Aquarium. Here she finds out more about the Turtle Rescue Program and meets an extraordinary young woman.

I’m lying flat-out on a small deck above a huge water tank, camera poised, watching something amazing happening. Beneath me are Talitha Noble and Sandy. Talitha is a young Marine Biologist and Turtle Rescue Program coordinator. While Sandy is a rather large 15-year-old (approximately) green turtle. What makes the scene so extraordinary, is that the turtle is swimming to Talitha not for food, as could be expected, but for affection. Talitha strokes Sandy, under her soft fleshy neck, just as I would do to my cats. Sandy moves away, swimming in a wide circle in her tank, flippers moving slowly, returning for affection from the human who is both friend and savior.

“The Turtle Rescue Program was formalized this year. We have established 10 collection points between Cape Town and Plettenberg Bay. But, we have been doing rehabilitation for much longer,” says Talitha. “We wanted to educate the public about what to do should they find an injured turtle or hatchling on the beach.”

“With this program in place, we hope to see an increase in rescued turtles. The hatchlings enter the sea in KZN from places like Bhanga Nek, Cape Vidal, and Sodwana Bay. Some get caught in the Agulhas current and drift far south into the colder Cape waters. Here they go into ‘Cold Shock’. Many have also ingested microplastics. This, together with a lack of food, injuries and dehydration makes their condition dire. When they are brought in, we rehabilitate them until they regain their strength, health, and are of sufficient size to release. “The highest intake,” Talitha tells me, “is in May. But, they come in throughout the year, particularly when there has been a storm or a howling South-Easter”.

Behind the scenes at the Two Oceans Aquarium

I start my tour of the Aquarium with a ‘behind the scenes’ look at the tanks where the water is filtered, and temperatures regulated. Then we visit the kitchen where food is prepared for all the sea creatures. I don’t spend long here because the smell of gutted fish is overpoweringly bad. (I&J donate most of the food such as pilchards and squid.)

Then I get to meet Moya, a green turtle. “The green turtles tend to be friendlier than the loggerheads,” Talitha tells me. “Moya was flown to us from Plettenberg Bay, hence her name. It means ‘wind/air.’ Her flipper was damaged, possibly by fishing tackle, but it’s healing nicely. We should be able to release her soon.”

Phiko, a yearling loggerhead is my next stop. “Phiko has a spinal cord injury and so could only use one flipper. With physio, he is recovering well” Talitha explains. “On December 16, 2017, we released Yoshi off Cape Point. She is a 183 kg loggerhead who spent over 20 years at the Aquarium. We’ve been monitoring her progress.” At the time of writing this article, Yoshi had reached the warmer waters of Angola, traveling at an average of 29.5 km daily, covering over 3 600 km!

At the hatchling rescue tanks there are approximately 15 hatchlings. For monitoring purposes, each is numbered. In the indoor tanks, I observe still more hatchlings. I watch fascinated as Talitha cleans one. “The area where the hatchlings and rehabilitation turtles are kept is an ICU and as a result, we need to spend a lot of time with medical care and hand feeding. It’s a huge task, so we rely very heavily on volunteers to assist. We have an amazing team,” Talitha informs me.

Terry and Evanne Rothwell from Fish Hoek, have been volunteers at the Aquarium for the past 12 years. “I started distributing turtle rescue boxes to help the survival rate. Beach walkers find hatchlings and mistakenly try to put them back into the sea. The hatchlings need to be kept warm and dry. These boxes have airholes. Then they can be transported to the Aquarium. Muizenberg and Fish Hoek Shark Spotters, Law Enforcement agents from Muizenberg and Fish Hoek, as well as local Life Guards, and vets, all have boxes,” Evanne tells me.”

We head back to the larger tanks to Sandy and Bob. The turtles are overjoyed to see Talitha again. They rise to the surface to be stroked. Sandy rules, and so Bob’s attempts for affection are thwarted as the female Green turtle edges him away. “When Sandy arrived from Witsands,” Talitha says, “she was in a very bad state. She had propeller wounds on her carapace, and required stage Six pain medication as well as tube feeding.”

Many of these turtles have ingested microplastics and larger plastic pieces. “Bob, was listless and not properly recovering from his initial injuries. One day after he defecated, and we found the problem – a mass of plastic, had been inside him,” Talitha says. “You read about plastic pollution in the ocean, but when you see the pitiful results, it takes on a whole new meaning.”

Talitha and the Turtles

The close bond between Talitha and Sandy is beautiful to watch. “Surely,” I ask, “when it comes time to release her, it will be hard for you?”

“I’m already preparing for that day,” Talitha says, clearly moved, “but she’s a feisty turtle and strong-willed. We call her ‘our little feminist.’ In fact, I’m more concerned about the ocean with her in it, than the other way around!” she quips. “Sandy is not meant to be here. That’s obvious. She belongs in the big blue.”

“Your love of turtles. How did you get involved?” I ask Talitha. “Ever since I watched the movie Flipper I wanted to work with sea creatures. I started with the Young Biologist Program and volunteered at the Aquarium at every opportunity. I spent my life gutting fish and stinking as a result—my mother had to drive with the windows open! When it came to studying, I naturally chose Marine Biology. But it’s not a career as such, and without real experience, I couldn’t find a job. I approached the Aquarium, volunteering my services in return for experience. After a year, they created the job of Conservation Coordinator for me. Turtles tick all my boxes – education, conservation, and lifestyle. I have found my passion,” she smiles.

I ask about the strange orange markings around Sandy’s mouth. “Ah,” Talitha tells me, “that’s carrots! Green turtles, like loggerheads, are opportunistic eaters. This is why they are especially susceptible to eating plastic. Green turtles however, are mostly herbivorous, unlike the omnivorous loggerheads. As we can’t source sufficient seagrass, we feed them a mixture of vegetables. Carrots are her absolute favorite!”

I take a turn to massage Sandy’s soft, squelchy neck. The texture feels strange—marshmallow-like. I must be doing something right because she opts to stay, rather than join Bob below.

Interacting with animals takes an ordinary day and makes it extra-ordinary. The words of Dr. Zeuss play through my mind: “And the turtles, of course … all the turtles are free, as turtles and, maybe, all creatures should be.”