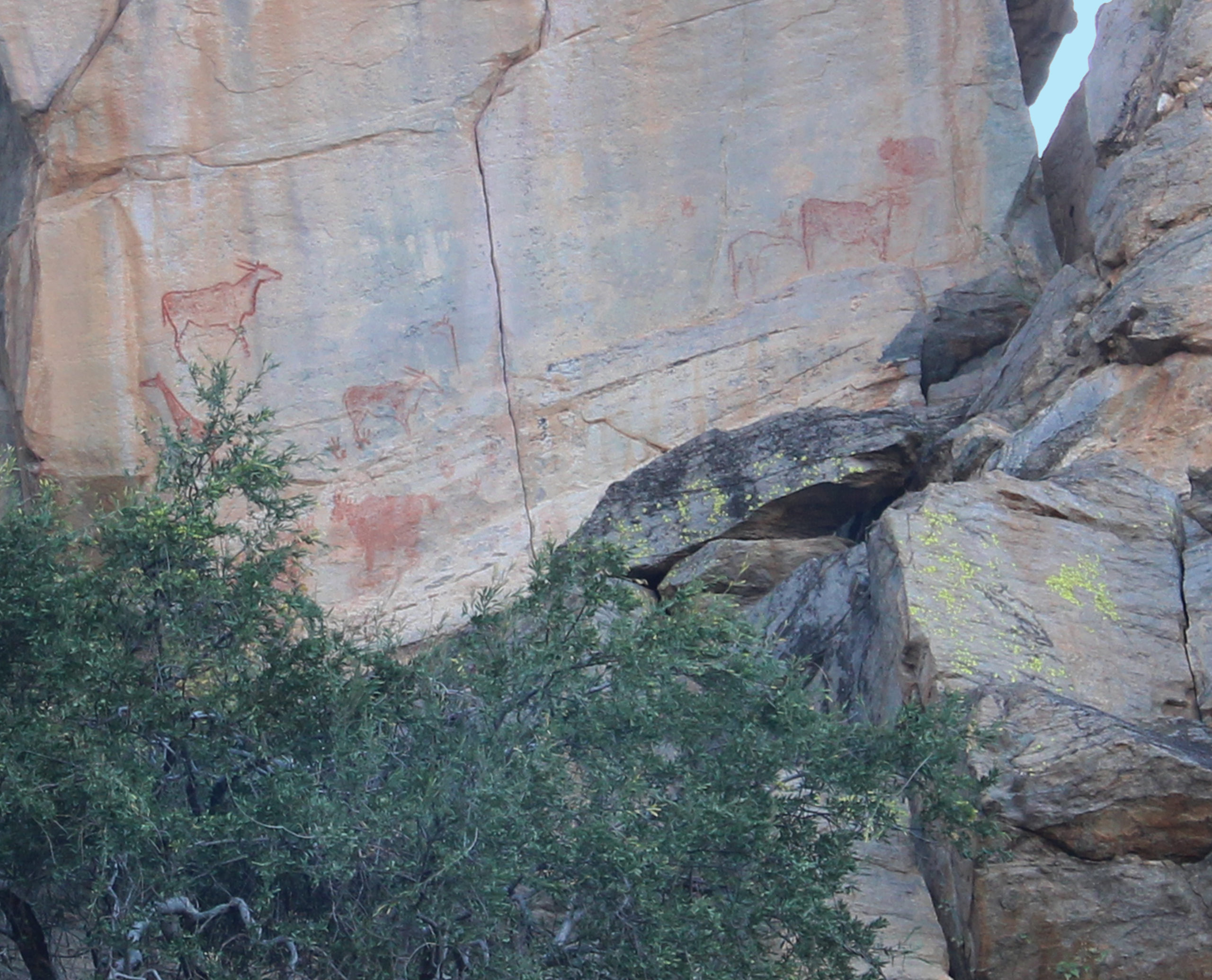 South African place names with Khoi origins. Ann Gadd discovers some common place names that are Khoi in origin and reveals their meanings.

South African place names with Khoi origins. I just love South Africa! Where else in the world would you find names like Tannies, Koeboeb, Mielierug, Tietiesbaai, Shongololo, Mikiki, Cacadu, and Shitsalala? Our names reveal the diversity of our land and its people. Sure, many of the old indigenous names have been replaced with pukka British names of kings, queens, and governors, or the names of Dutch pioneers who traversed the land in search of fortunes, good farming land or simply to get away from the Cape. But many of the old names still remain, even if they have become anglicized or translated into Afrikaans.

Fun fact is that, unlike English or Afrikaans place names, you won’t find a Khoi name that commemorates a person as such, except for the town of Pofadder, which is name after Klaas Pofadder, a Koranna chief, (although it did change to Theronsville for a short time before reverting to its original name). The Khoi used names to describe an area itself that others could relate to or find, using plants and geographic descriptions to do so.

You //#!name it! Here then some of the places that owe their names to the Khoi:

The Karoo is an interesting name. It’s like ‘kangaroo’ with the middle part missing and doesn’t seem to have any obvious origin when you first hear it. Over time several spellings have existed, such as Karroo, Caro, and Kuru. It originates from a Khoi word, recorded as Xhaeruh, Phaeruh, or Garo, meaning ‘dry’ or ‘hard’. Another interpretation has it meaning ‘land of thirst.’ It was first recorded in 1689 though as Garo (meaning dry, desert, or arid) and !garo-b (desolate waste). From there the ‘G’ seems to have morphed to a ‘K’ and if you say the words Garo and Karoo, (a shot of witblitz helps), it’s easy to see how this could have happened in time.

The Khoi were nomads and so naturally crossing the vastness of the Karoo was no mean feat when it came to surviving. It’s understandable then, that in this land of thirst, you’ll naturally want to head to the nearest Royal/Grand/Central or similar hotel to alleviate your parched throat!

The name Addo, (a region east of the Sunday’s River and home to the famed elephant park of the same name), has sadly nothing to do with elephants. It also has nothing to do with a ‘plus one’ as in ‘add ou’. Rather, it’s purported to be a Khoi name referring to the salt ravine or Soutkloof (a gorge in the southern part of the Addo Elephant Park, just north of Colchester,).  Kxa meaning ’salt’ and dau or !gaa meaning ‘kloof’ or ‘ravine’. It was originally written as K’adouw, Kaddo, or Kadouw. So, the mighty elephant loses to a mere (but essential), condiment.

In the Karoo, you’ll find the Tankwa National Park, home to 180 bird species such as the Burchell’s courser, Verreaux’s eagles, and the Karoo long-billed lark, as well as over 180 plant species indigenous to the area. It’s not the place to head if an absence of throbbing music, gourmet restaurants, and retail therapy is going to send you into a panic mode. Rather, it’s the place to reconnect with your soul in silence and a stress-free timeout. For those of you who just love to text on your phones with the addictive compulsion my golden retriever has to fetch things, you will not enjoy the lack of reception in the area. If you’re like me though, after the initial day of withdrawal symptoms, it’s an absolute joy not to be governed by a small piece of metal and plastic.

But what, you ask does the name actually mean? Like many names, the answers are not cast in stone. More theories and summations than facts. The Tankwarivier is a tributary of the Doring River and flows, (or trickles depending on the rainfall), through the park. The competing theories here are San (alternative names: Khwe, Basarwa,) versus Khoi.

Theory one is that the name derived from the word ‘San’. San-qua or San-kwa, kwa being plural, so roughly translated as ‘many San.’ Great, if it weren’t for the inconvenient fact that it was never recorded like that, but rather as tkanna (1691) or t’kanna (1705), t’kan (1775), and later as Tanqua.

So, the second theory is that in Khoi, tkanna, t’kanna, and t’kan mean ‘eland’. Given the proximity of Elandsvlei, it’s possible this Afrikaans/English name was a translation. The Khoi word for vlei is thought to be !kuwi or #ga (millennials, please note, this is not the same as #amazingtravel or #newboyfriend, etc., but rather # indicates a type of clicking sound), so you get Elandsvlei or Tan#ga – same same!

Karma catching up on a guy called Tsit? Nope, but nice try! This stunningly beautiful area home to ancient Yellowwoods, hikers, and adrenaline junkies, wanting to river raft, bungee jump, or swing through the trees, also indicates its earliest residents.

The name is of Khoi origin, and derives from tsoa-tsoa meaning ‘begin’ and kamma, or //gami being ‘water’. Presumably, traveling Khoi saw the mighty waters of the Storm’s River and following it, discovered the river mouth (and some spectacular scenery).

I rather enjoy the fact that attempts made to alter the original Khoi name failed In the end, Augrabies has won out over King George Falls named by the missionary James Moffat in 1818, and explorer Antonio Farini’s Hercules Falls, named only five years later. //orab was the original name, written as Ankoerebis or Aukoerebis, which could either translate as ‘the place that thunders’ ‘the place of great noise’ or ‘hollow place’, referring to the gorge itself. The gorge is 240m deep and 18km long. An exploring Swede, Jacob Wikar, wrote in 1773 that when he visited the falls in May, the dust was blowing as high as the 52m waterfall itself, which would definitely make me avoid that the dryer months for my next visit!

Covering 440 000 square kilometers, Namaqualand sprawls across the west coast of South Africa. In spring, its dry, dusty soil is transformed into an array of spectacular colors. Simon van der Stel name one of the mountains Spektackleberg, ‘Spectacle Mountain’ after the flowers he found in the region.

The Nama are the largest of the tribes referred to as Khoi, Khoikhoi, or Khoekhoe, which incidentally means ‘people people’, or ‘real people’. They have lived in the area for roughly 30 000 years, as nomadic pastoralists. The name Namaqua, (first recorded in 1659) is simply the plural of the name Nama, qua denoting ‘many’ with the Afrikaans/English ‘land’ being added, so ‘many Nama land’. In (1761) this region was recorded as being “Amacquas Land,” which was no doubt simply the way the name sounded.

I always enjoyed the poem by C. Louis Leypoldt:

The trouble was, clearly, my geography skills didn’t match my poetry ones and for years, I never knew where the Hantam actually was, (it’s in the Northern Cape with Calvinia as its main town) so it was wonderful to visit the area recently.

In Toponymy, the study of place names (yes, I’ll confess I only discovered the word today), there is often much disagreement between experts. Sitting now, surrounded by various books, this is indeed the case. The trouble is, the names were usually only verbal and depended hugely on who was recording them, at a time when few people were literate, so changes in spelling and confusion in meaning, often occurred. Toponymy is not always an exact science, but more like a collection of great assumptions.

I’ll leave this one for you to choose: What we do know, is that both options have Khoi origins. The original Khoi name was !Han ‡ami or heyntame (without the clicks). It means (and for this you’ll have to take my word), “rooiuintjiesberg” (a small two-leaved bulb, with a long stem and delicate flowers). Botanists out there would know it as, Pelargonium bifolium or storksbill. It was originally the name of a mountain range in Namakwaland. Later, the name also given to a mountain range near Calvinia.

Your second choice is that it was named after the Hantamsrivier. The Khoi word for ‘father’ (recorded in 1702) is ha, with han being the plural. ‘Reed’ translates into Khoi as t’a (1801) so hant’a would mean ‘father’s reed’. The Dutch name is given as Vaderlandsche Rietfontein, after the reed known as the ‘fatherland reed’. The Dutch name then is simply a translation of the Khoi name.

So then, a reed or flower? I guess we’ll never really know.

Curious about the previously mentioned Tannies, (an area on the Sunday’s River)? It’s not a place where all the local aunties met for a braai and a good glass of Pinotage. Rather, the name derives from the Khoi ta°nie or /anie referring to a small bulb, the scales of which were used as a poison for arrows.

South African place names with Khoi origins. See how many others you can discover.