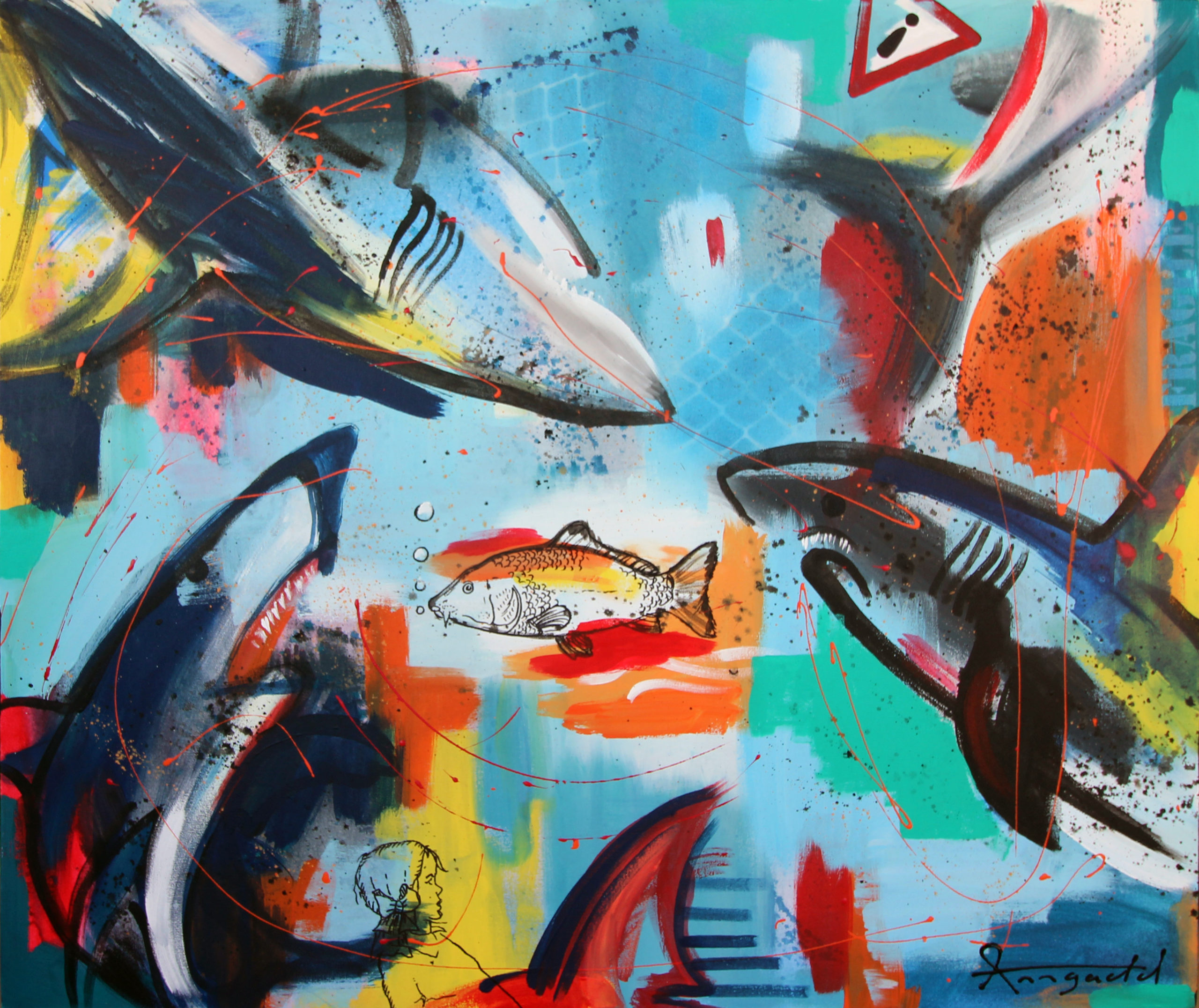 Have the Great Whites Gone? I investigate the disappearance of the great white sharks from False Bay and along the coast. Adapted from the article that appeared in Country Life magazine.

Have the Great Whites Gone? Years ago, my gran aged 88, told us she’d just seen the Spielberg movie, Jaws. It featured a giant great white shark chomping swimmers. I was somewhat taken aback—it’s not exactly sweet little old lady entertainment. Curious to find out if she’d enjoyed it, I asked her about the movie. “Just a lot of old fish,” was her comment. Would that the world had seen it the same way. Instead, Jaws sparked a fervor of fear—a shiver of sharks, that would see this animal become the world’s most misunderstood creature.

I’ve personally had several shark encounters, though not perhaps in the best way. Let me give an example: A fine Cape day with a fresh Southeaster blowing. My hubbie and I practicing our boardsailing racing skills. It’s liberating and exhilarating flying across the water. Here there are no cell phones, emails to answer, traffic, or children needing lunch—just the freedom of the endless sprawl of clear sky and turquoise ocean. About 300m offshore we gibe and are heading back towards the beach. I’m just ahead and downwind of Anthony, so I fail to notice the large ragged fin that cuts through the water spectacularly close behind me.

He knows me well enough to realize that shouting a warning could well result in extreme panic and me doing something daft like falling off the board, thereby proving to the shark that there is such a thing as a free lunch. Unable to help, he heads to shore. I on the other hand, being oblivious of my new racing companion, head back out to sea. Later, when I do land safely on the beach, I am unaccompanied. Perhaps Jaws had a bigger fish to fry for lunch?

Why we need sharks

I understand that for many who enjoy the ocean, the news that the population of great whites is diminishing could result in the natural response: “Yay, less chance of being chomped!” The reality though is that what happens to one creature, affects us all. The decline of the great white shark population in False Bay and the surrounds is already, and will continue, to affect the entire eco-system.

For example: the decrease in great whites has resulted in an increase in the seal population. Larger fish being scarce, means that seals are turning to penguins, with their small fish-filled stomachs, for a snack. Naturally, this is negatively affecting the penguin population.

Shark Spotters are a chain of people employed to monitor sharks. You’ll find them at Caves (Kogel Bay), Muizenberg, St James/Kalk Bay and Fish Hoek (year-round) and seasonally (Oct-April) at: Monwabisi and Clovelly. They warn swimmers and surfers of any shark activity close to shore, allowing sharks and people to better co-exist.

In the 15 years of their existence, Shark Spotters have accumulated long-term data on great whites, as well as other species. So, what’s their current take on great whites?

I want to get to the source of what is, or sadly has happened, so I call on two experts in the field—Sarah Waries (University of the Western Cape), CEO of Shark Spotters, and Dr Sara Andreotti (Stellenbosch University), to enlighten me.

I head to Muizenberg beach where Shark Spotters Information Centre is located to meet Sarah Waries. Sarah is doing her master’s degree on shark bite mitigation measures. “So where,” I ask, Sarah “have the great whites gone?”

“It is hard to determine exactly the cause of the reduction in white shark activity,” she tells me. “However, the most significant change in the Bay appears to have been the arrival of a specific group of orcas (Orcinus orca). These orcas specialize in feeding on sharks.” These orcas, named Starboard and Port, because their dorsal fins curl opposite ways, have a liking for nutritious, fatty shark livers which they can remove with surgical-like precision.

“The Orcas were first seen in our area in 2015. Although they travel long distances along the coast, they have visited False Bay on numerous occasions over the past four years,” Sarah Waries says. “While they appear to have had quite an impact on white shark activity, it is possible that other factors, such as prey distribution and abundance, fishing activities and changing environmental conditions, may also have played a role in the shark’s disappearance from False Bay. We are working with scientists along the whole South African coastline to try to better understand the situation.”

A visit to marine biologist and shark expert, Dr Andreotti

Marine biologist, Dr Andreotti disagrees on the primal cause of the great white’s disappearance being the orcas. She has been researching great whites for the past 13 years and has been working with the SharkSafe BarrierTM project collecting data, since the organization’s inception. “Whilst the orcas are capable of killing great whites, I don’t believe they could be the sole cause of the sharks’ disappearance. We’ve had Orcas along our coastline before, and the great whites were still around,” comments Dr Andreotti. “Correlation doesn’t mean causation. A healthy population of sharks wouldn’t abandon their hunting ground for months as these sharks have done.”

Three reasons for the demise of the great white population

Rather, Dr Andreotti gives three reasons for the demise of the great white population. Listed in order of importance:

I find the charming Italian in the Department of Botany and Zoology at Stellenbosch University. What brings a graduate from the University of Trieste, Italy, to our shores to conduct the first national assessment of South African shark population and genetic structure? “Whilst visiting South Africa while diving out of the shark-cage, I met well-known conservationist Michael Rutzen of Shark Diving Unlimited. He uses his body movements to communicate with sharks. He has so much information on these animals, that I asked if I could work with him. We’ve been collaborating ever since,” she informs me. “When I started, so little research was done on the great white, that from a scientist’s perspective, they offered huge potential for new discoveries.”

With great whites seemingly under threat, I ask Dr Andreotti what her dream would be for the great whites’ future. “Nets and drumlines banned, sustainable fishing in small boats rather than large scale commercial fishing, and a better understanding of the sharks themselves.”

Next time I head into the sea in False Bay it will be with the knowledge that it’ll likely be without the largely misunderstood great white, at least for now. Whatever the primary cause of the demise of the False Bay shark population, the preservation of the ocean’s health is a delicate balance which man seems intent on destroying. As a result, the great whites have far more to fear from man than we do from them. Not seeing them along our coastline is far more concerning than spotting them. Our future depends on what we all do now to help provide that balance.

Shark nets for prevention rather than decimation

It’s because of the destructive nature of shark nets, that Dr Andreotti, together with Professor Conrad Matthee, in collaboration with well-known conservationist Michael Rutzen, Dr Craig O’Connel from the USA, coastal engineer Laurie Barwell and Stellenbosch University (Innovus), created a Shark Safe Barrier™.

The barrier works on the understanding of the great white’s dislike of dense kelp-forests and their sensitivity to magnetic fields. Several rows of staggered high-density polyethylene pipes imitate a dense kelp forest. On the row facing the sea, large ceramic magnets have been added to create a strong magnetic field which the sharks don’t like. The idea has been proven to be successful when tested in Gansbaai. Here, not a single shark, despite being enticed to do so, entered the barrier. The idea is now being tested in La Réunion where there have been 11 fatal shark incidents since 2006. This makes La Réunion the highest rated shark attack country per person—more than three times higher than South Africa.

The Shark Spotters solution is a simple low-cost barrier made from cricket net material, which gets dropped into the sea during the day when sharks are around and gets collected in the evening. It’s an inexpensive and simple solution. “With small mesh, unlike the KZN nets, there is no chance of entanglement,” says Sarah Waries. “It’s low cost and easily removed during storms so as to prevent damage to the net.”

Web article: (or boxed and listed as part of the main article)

Loads has been written about great white sharks, not all of it true according to shark expert Dr Sara Andreotti from the University of Stellenbosch.

Great white sharks are listed as “vulnerable” on the IUCN Red List endangered species. Although they have no natural predators other than orcas, the impact of humans in the form of hunting and pollution has seriously impacted their ability to survive.

Common belief: Sharks live for an average of 70 years. “Not so,” says Dr Andreotti, “that’s based on studies that back-calculated their age by the growth rings of their vertebrae, but we don’t know for sure how long a white shark can live.”

Common belief: Sharks have between two to 10 pups. Dr Andreotti: “A great white in Taiwan was recorded as giving birth to 15 pups which is the maximum recorded amount. We have no evidence to prove if this is common.”

Common belief: Great whites have seven rows of teeth. “They have five rows actually, and the teeth are constantly being replaced by newer teeth,” corrects Dr Andreotti.

Common belief: Great whites eat their own pups. Dr Andreotti: “This not the case for great white sharks. As the female keeps on producing unfertilized eggs to feed the pups. The pups of sand tiger sharks (Carcharias taurus) however do eat each other in their mother’s womb.”

Common belief: Great Whites have highly developed smelling skills and can detect a drop of blood in 100ℓ of water. “This is true,” comments Dr Andreotti. “They only respond to the smell of blood that is their potential prey. If you drop a liter of cow’s blood into the water next to them and they won’t react as they do for their natural prey.”

Common belief: When younger they’ll eat fish. As they mature, they prefer mammals such as seals and small whales, as well as carrion. “They eat fish throughout their lives,” Dr Andreotti informs me. “They don’t commonly eat whales, unless the whale is already dead.”